The photographs, except the graffiti photographs made in New Mexico (4″x5″), were made using Holga and Diana plastic film cameras.

The photographs in the exhibit are singular images. They were made in reaction to a place (physical or mental), an environment, or an opportunity. They were not made as a part of a body of work.

The graffiti photographs were made several ago years on a beautiful sunny day at an abandoned water tank in rural New Mexico. While going through my archive, these images made an impression on my wife, Julie, and me. She felt that there was a concept waiting to be harvested. In the past, we have both made images of graffiti. Typically we use a smaller detail out of a larger scene for the subject. This same concept was applied to the two photographs of graffiti – the larger scene is broken down into smaller singular images.

The installation concept of the exhibit was created, designed and implemented by Satch.

Photographs are titled with their location. 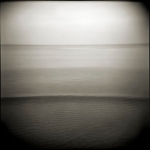 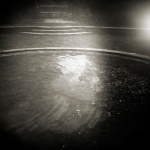 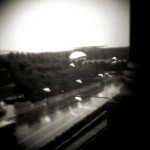 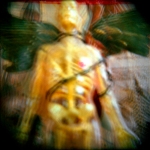