I make photographs as a reaction to my environment and my inner spirit, to discover what is not obvious, what is hidden. My view of photography is simple and direct. It is best summarized by photographer William Christenberry who wrote, “Concern yourself not with the question whether the medium of photography is art. The question is dated and absurd to begin with. You are art or not; what you produce is or isn’t. And don’t think about that either, just do, act.”

The photograph’s frames were specially handmade exclusively for this exhibition by Edward Satchwill II of Indianapolis Indiana. 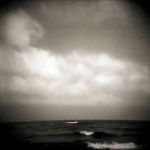 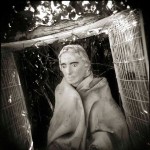 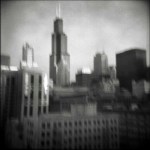 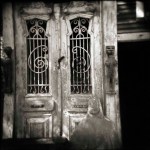 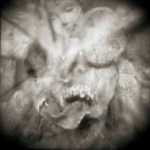 In the black and white photograph “IMA, Indianapolis, Indiana,” you see a statue with trees and the sky in the background. But the sky itself seems to bleed into the foreground statue. This photograph seems to have an unexpected quality of depth — beyond the mere surface of things. Ron Kern took this photo with an antique plastic camera that has just one shutter speed. Yet he works creatively within this limitation; he often takes multiple exposures of the same subject or jars the camera during exposure to achieve a certain effect. His photos are scanned into digital and, although he adjusts contrast and light levels, he doesn’t otherwise manipulate his images subsequent to his exposures. Nevertheless, his exhibited works are artfully composed — in a time when it’s almost too easy to merely take good photographs — and they possess a certain unity, probing into and beyond seemingly ordinary subjects to find their true essences. Through Aug. 3