Northern New Mexico can simply mean the northern part of New Mexico, but in cultural terms it typically means the area of heavy Spanish settlement and the eight northern Indian pueblos located in the north central portion of the state.

The Spanish and Native American cultures, many times intertwined, meld with the landscape, sky and ever-changing light making Northern New Mexico an intoxicating and inspiring place.

The arts are an inescapable and important element in the culture. Pueblo potters and jewelers, and Spanish carvers and weavers, are all a large part of the fabric of life. Over the years, artists from all parts of the world have made their way to Northern New Mexico. Many exceptional artists, such as Sharp, Blumenschein, Higgins, Fechin and O’Keefe made Northern New Mexico their home and not only left their indelible mark on the art world, but also helped shape the way we view, and think about, Northern New Mexico.

Religion is an important part of day to day life in New Mexico and is the basis for the rich history of the southwestern United States and especially Northern New Mexico. The eventual conquest of the Native Americans by the Spanish resulted in Catholicism being the predominant religion of the region. But, the Catholic religion does not have a straightforward existence. The pueblo culture intertwines Catholicism with ancient Indian religious rites. One will find both Catholic churches and kivas in pueblo villages. The Penitente Brotherhood has a long history in Northern New Mexico and is still active. Morada’s dot the landscape where the Brotherhood meets to serve its community.

Northern New Mexico is rich in its cultural significance, spirituality and landscape – the oldest church in the United States is in Santa Fe, Native Americans continue to sell their wares at the Palace of the Governors, deep red light envelopes the Sangre de Cristo (Blood of Christ) mountains at sunset, evidence of miracles abound at El Santuario de Chimayó, Spanish villages are tucked into the mountains on the High Road to Taos, Taos Pueblo continues to flourish, and on and on. Experiencing the sacred spirit found in all that embodies and forms Northern New Mexico’s history and existence will change one’s perspective on life.

Over the course of many, many years of visiting and experiencing Northern New Mexico, I made numerous photographs, some of which are in this exhibit of fine photography that presents the spirit of this captivating and fascinating place. 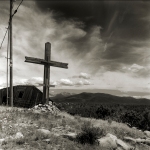